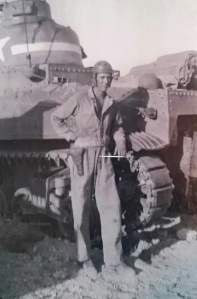 Once when I was little my grandma told me the story of my grandpa’s service in WW II and I didn’t believe her. I knew that my grandpa was considered a hero, and had a purple splotch across his hand, but the story my grandma told was unbelievable. She was a well-known embellisher of ideas, and even though I was only nine, I was wise enough to be skeptical. It turns out, every word my grandma told me was true.

On June 6, 1944, thirty two Duplex Drive Tanks from Company B of the 741st Tank Battalion entered the  waters of the English Channel, meant to swim across to the Easy Red sector of Omaha Beach and invade Normandy as part of D Day. The tanks were “30 tons of steel in a canvas bucket” (Vitamin Baker, p 13) and had never before practiced in waters so choppy, or weather conditions so poor. When the tanks hit the rough water the inflatable attachments ripped off. Tragically, all but three of those tanks sank.

My grandpa’s tank make it onto the beach, making him one of the first men to land on D Day.

His tank was critical in taking out pillboxes and other anti-aircraft artillery. At some point my grandpa was shot in the hand when he climbed out of the tank to reload, but he kept on fighting anyway. For my grandpa’s service that day he received both the Purple Heart and the Silver Star.

The 741st Tank Battalion went on to be part of several significant events in World War II including the Battle of the Bulge and Krinkelt/Rocherath. For their service during the violent counter-attack in the Krinkelt-Rocherath area of Belgium, the 741st Tank Battalion received a Presidential Citation which stated:

Again and again the infuriated enemy threw armor and infantry against the dauntless defenders but for three days and nights these assaults were turned back by the unwavering fortitude of the inspired position. The tank men covered the withdrawal and were the last to leave the scene of battle. During the bitter three day engagement they had destroyed twenty seven enemy tanks, five armored vehicles and two trucks. Their indomitable fighting spirit and unflinching devotion to duty are in keeping with the highest traditions of the armed forces.

Less than ten days later on Christmas Day 1944, my grandpa wrote the following letter to my grandma in the midst of the Battle of the Bulge:

Hiya Honey, Merry Christmas. It’s cold enough to snow on the ground and it could be like Christmas but instead it’s more like the fourth of July. This finds me well and going along pretty good. Last year at this time we were thinking that maybe we would be home for this Christmas but here we are still going.

My grandpa wrote this in the middle of terrible fighting, with bombs and artillery exploding everywhere. Did you ever see Band of Brothers? The 741st Tank Battalion were the men coming to the rescue.

The 741st Tank battalion was also responsible for the liberation of Flossenburg Concentration Camp. Here is a description from page 33 of The Story of Vitamin Baker about Flossenbrrg:

The large German concentration camp of Hasag is near Flossberg. As such, members of the Battalion had the chance to see with their own eyes the brutal results of Nazi domination. Here huge amounts of political prisoners were kept. These were made to work the munitions factories and given the very minimum of food and care. The weak either died or were shot; the strong held on only to become sick, starving broken. Full evidence of these inhumanities was found all about the camp. The sights were horrible and unbelievable.

Of the original men in Company B of the 471st Tank Battalion, twenty nine were killed in action, five went missing, and three became prisoners of war. Fifty six soldiers were wounded or hospitalized in the line of duty. Only forty six of the original members came home.

My grandpa was lucky to return to America alive. The record of his service can be found in an out-of-print book called “741st Tank Battalion D-Day to V-E Day and the Story of Vitamin Baker ‘We’ll Never Go Overseas’.” It tells a story of incredible courage and sacrifice

My grandma knew all about the 741st Tank Battalion and I am forever grateful that she filled me in on the details. My grandpa, you see, never talked about it at all.

Jennifer Bardsley believes in friendship, true love, and the everlasting power of books. She lives in Edmonds, Washington with her her husband and two children, and walks from her house to the beach every chance she gets. When she’s not camping with her Girl Scout troop, you can find Jennifer curled up with a romance novel on Saturday night, diet soda in hand, secretly wishing bustles were back in fashion. View more posts

9 thoughts on “The brave men of 741st Tank Battalion”

Say hello! What do you like to read? Cancel reply